Home → The Adler Group Articles → Back to Hiring Basics: Benchmark How and Why the Top 25% Change Jobs

Back to Hiring Basics: Benchmark How and Why the Top 25% Change Jobs 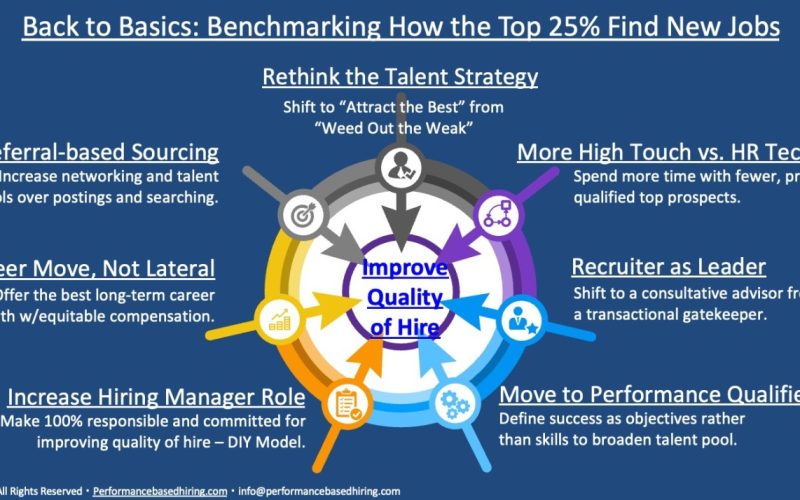 It turns out that anyone can be in the top 25% with the right job, the right company, and the right hiring manager. But this is a rare event despite having spent $400-500 billion in job postings and HR tech in the past 25 years in the hope of matching the perfect job with the perfect candidate.

So, what's the problem?

It could be that we're looking in all the wrong places. Instead of investing in the latest new-fangled hiring trend, maybe we should be focusing on something else entirely. One idea that I’ve seen work since 1978 when I first became a recruiter is benchmarking how the best people change jobs and why they excel once they’re hired. Here are the basic findings.

Recruit and Hire the Top 25% by Benchmarking Best Practices

Offer a career move, not a lateral transfer.

If you don't define the role as a high-impact career move, few top performers will be interested. Start the process by asking the hiring manager to describe what a person needs to do or accomplish to be successful rather than listing a bunch of generic “must-have” skills and experiences. Once you have 5-6 key performance objectives (KPOs) describing the bulk of the work, like “design a new system,” ask the hiring manager why a top 25% person would want this job for something other than the compensation package. This is the EVP (employee value proposition) that will be in the first line of every message and job posting.

Narrow the search to only semi-finalists.

By only talking with prequalified semi-finalists it's possible to have meaningful discussions with everyone in consideration. A semi-finalist is someone who has been formally recognized for doing outstanding work comparable to the KPOs AND who would also see the role as a career move. From my experience, few of these candidates will be found via job postings. Instead, a heavy emphasis needs to be placed on referrals and the development of deep networks of talented people in similar fields. Without this “high touch” approach the process is unlikely to be too successful. (Candidates can get into the networking pool by learning how to hack a job rather than applying directly.)

While referrals should represent most of the people being considered, additional candidates can be found using advanced sourcing tools like Seekout.com and LinkedIn Recruiter. Regardless, few people will respond to any type of outreach program unless the messages are personalized and highlight the career merits of the role. Just as critical, it’s essential to remove the time pressure by inviting the person to begin a discussion about a possible career move rather than forcing the person to only consider a specific current opening.

In this approach both the hiring manager and candidate get the information they need to make the correct long-term Win-Win Hiring decision. Win-Win Hiring means hiring for the anniversary date, rather than the start date. Spending more time with fewer people makes it possible for everyone to fully understand the career merits of the role and make the best long-term career decision.

Don't take no for an answer.

It’s important that when prospects are first contacted, they realize the purpose of the recruiter's call is to have a career discussion and be part of a network, rather than just to see if they’re interested in one specific open role. This requires recruiters to prevent the person from opting out too soon. This is why the company needs to implement a recruiting and closing process that involves overcoming objections using the “Challenger” sales model. This approach ensures the candidate fully understands the career merits of the role before dismissing it out of hand.

Deliver on the promise.

The job offered and accepted must be one assigned. A misunderstanding after the person is hired is a major cause of dissatisfaction, underperformance and turnover. Reviewing and clarifying the KPOs and agreeing on the timelines before the offer is finalized is a great way to ensure the hiring manager and the candidate are in full alignment regarding the actual job.

To hire the top 25% on a consistent basis recruiters must collaborate closely with their hiring managers at every step in the process. This Recruiter Competency Model describes these steps and the difference between exceptional and marginal performance. It also turns out that just about everyone can be in the top 25% with the right job at the right company and with the right manager. It all starts by getting back to basics.