(Note: This is an excerpt from the 4th edition of Hire with Your Head (Wiley & Sons, September 2021).

This chapter is about controlling interviewer bias. It is the most important chapter in the book since more hiring mistakes are made due to bias than any other cause. In fact, if you read only this chapter before conducting another interview and use these techniques for overcoming bias, you'll reduce you're hiring mistakes by at least 50%. (See graphic below.)

Part of this reduction will come by not hiring someone who makes the best presentation but won't or can't do the actual work required.

The other part of the reduction is more important: hiring a great person you normally wouldn't have by being more objective. 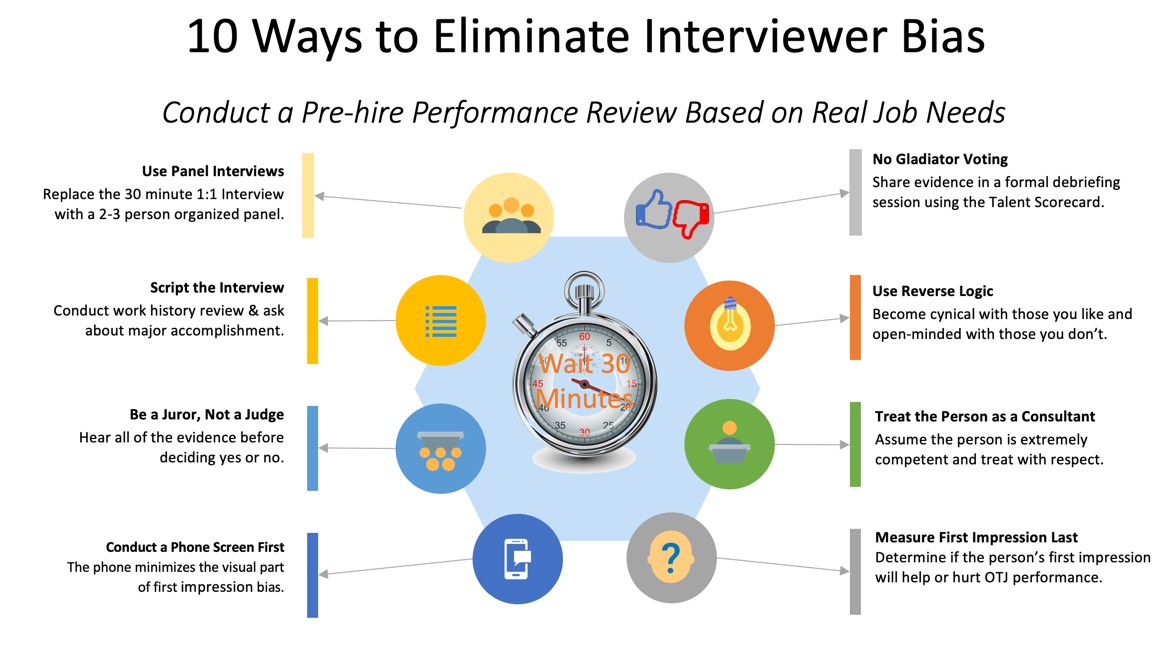 In the book each of these 10 points are described in detail with tips on how to implement each one as part of the interviewing process. (FYI: there are only nine shown in the graphic but one has twice the impact on controlling bias as the others.) However, the one that gets the most pushback relates to the impact of first impression on affecting assessment accuracy.

In fact, last year during one of our hiring manager training sessions, a VP of Sales got upset that I said first impressions don't matter. She went on to say that for salespeople first impressions do matter, so she couldn't agree with this step in the Performance-based Interviewing methodology. I then asked her if everyone with a good first impression turns out to be great salesperson. She said, “Of course not.” So I said why not wait until the interview is over to determine if the person's first impression will help or hinder the person's sales results. This way you won't be seduced one way or the other. She agreed this was a good idea.

Not surprisingly, when I checked in with her a few months after the initial training, she said that this idea worked even better than predicted. She rejected some sales candidates who made a great first impression but who had a spotty record of sales results. She also found a few people who didn't make a great impression but who had a strong track record of sales results whom she ultimately hired. To her surprise, she said that by deferring judgment until the end of the interview, it turned out these people's first impressions were not so bad as she initially thought.

This “surprise” happens all of the time for all types of jobs, including sales. Some people get nervous when talking about themselves. Some talk too much, others not enough. But by the end of the interview, when asked meaningful questions, people become their natural selves. It's an eye-opening experience for the interviewer as long as you can wait until the interview is over to have it. These people are often called the “hidden gems.” They were always there; you just have to work hard to see their ability.

While each of these tips will help minimize the impact of bias when interviewing, it's even better when all of the steps are embedded throughout your company's hiring processes. This will ensure you're not only seeing the strongest and most diverse talent possible, but also that each person is objectively assessed.