For the first 25 of the past 40 years, I was a full-time recruiter. Of the 500+ placements I made during that time (mostly mid- and senior management positions), only about a dozen were people who responded to a job posting. The others were referred or networked and most of them were passive candidates.

Just as importantly, I rarely needed to present more than 3-4 candidates to make one hire. And of the 500+ hired, well over half of these people were promoted or given larger roles to handle within a year or two. What’s more, less than 5% either quit or were terminated during their first year. I attribute much of this success to a process called pre-sourcing. The good news: any recruiter can learn the process and duplicate the results.

Simply stated, pre-sourcing means pre-qualifying people who are likely to see your job as a career move and who are also likely to get hired. Done properly, it only takes 8-12 people at the top of the funnel who meet these two conditions to make one great hire at the bottom.

An essential first step in pre-sourcing is getting the hiring manager to define the open job as a series of performance objectives, rather than a list of skills, experiences, and traits. To make the case that this approach would help attract stronger talent, walk them through the graphic shown below: 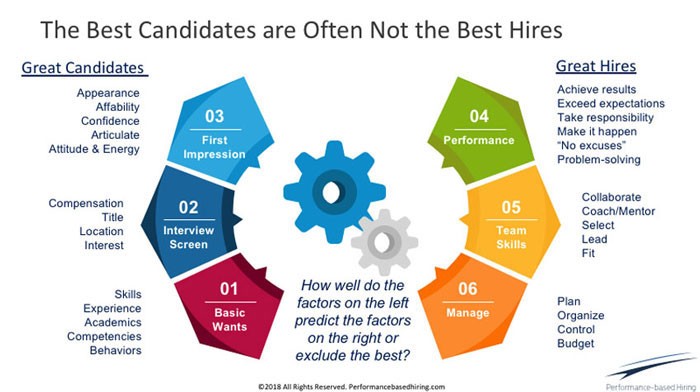 You can also simply start the intake meeting by asking this question:

“What does the new hire need to accomplish during the first year in order to be considered successful?”

This always results in 5-6 KPOs (key performance objectives) defining the tasks needed to be done and the measures of success. For example, for one accounting manager search the major objective was, “Lead and complete the implementation of the new international reporting package by the end of the fiscal year.” Of course, this likely required a CPA and multiple years handling complex international accounting issues. But proving the person could handle the major project would demonstrate they possessed the necessary level of accounting, systems, and project management skills needed. This approach also made it easier to attract strong people who would see the actual work and its business impact as a potential career opportunity.  Here’s an example of a job posting with just the challenges described and none of the skills listed.

Once the list of KPOs is compiled, ask the hiring manager if they would see a candidate who had successfully handled this type of work, even if the person had a different mix of skills and experiences than were listed on the job description. Few will say no.

With this performance qualified definition of the job in-hand, pre-sourcing can begin in earnest. Here’s how to get started using LinkedIn Recruiter to develop the initial talent pool:

1. Search for generic titles, including one level below the actual title of the job. Candidates will see the better title as an instant promotion and will likely be more interested.

2. Rather than list too many skills, just pick the 2-3 deal breakers or those that are most relevant. You’ll discover that in most cases the person has mastered the others, or they turn out to be less important. For the accounting spot mentioned above, “International Consolidations” and SAP were sufficient.

3. Search for achiever terms in the keywords to find outstanding people who the hiring manager would agree to meet. For example, “honors OR awards OR society OR laude OR speaker OR whitepaper OR patent” would find people who are smart and in the top half of their peer group.

4. Look for people who are a little light in total years of experience to find some fast-trackers. These are the people who learn faster and accomplish more than their peers. Most companies are hungry to find and hire these people.

5. As part of your search for recruitable high achievers, consider those who have changed jobs in the past 6-12 months. This is a talent rich pool since many of these jobs don’t pan out as promised.

6. Look for people in bigger companies or other industries who would be attracted to your company’s faster rate of growth.

The idea behind pre-sourcing is to spend more time pre-qualifying prospects based on the above criteria before any formal contact is made. Then review the strongest people with the hiring manager to get her/his agreement that they’re worthwhile pursuing. As a part of this, get the hiring manager to also agree to conduct an exploratory phone screen after initial interest is established. This is how you get both buyers in the process committed and engaged early in the process. More importantly, it’s how you hire great people for the right reasons — without searching for people who will never become finalists.