Use the Whole-Brain Interview to Predict Quality of Hire

After years of interviewing and tracking hundreds of people post-hire, it became obvious that most candidates get hired based on criteria that doesn’t predict success: typically, their individual contributor skills, depth of technical skills, an ability to interview well and their personality. The problem with this is that when they underperform it’s largely due to their lack of soft skills; poor decision making; weak organizational ability; inability to fit with the team, manager or company culture; and lack of motivation to do the actual work required.

The Hiring Formula for Success shown in the graphic was developed to address the wide difference between the interview assessment and actual on-the-job performance. 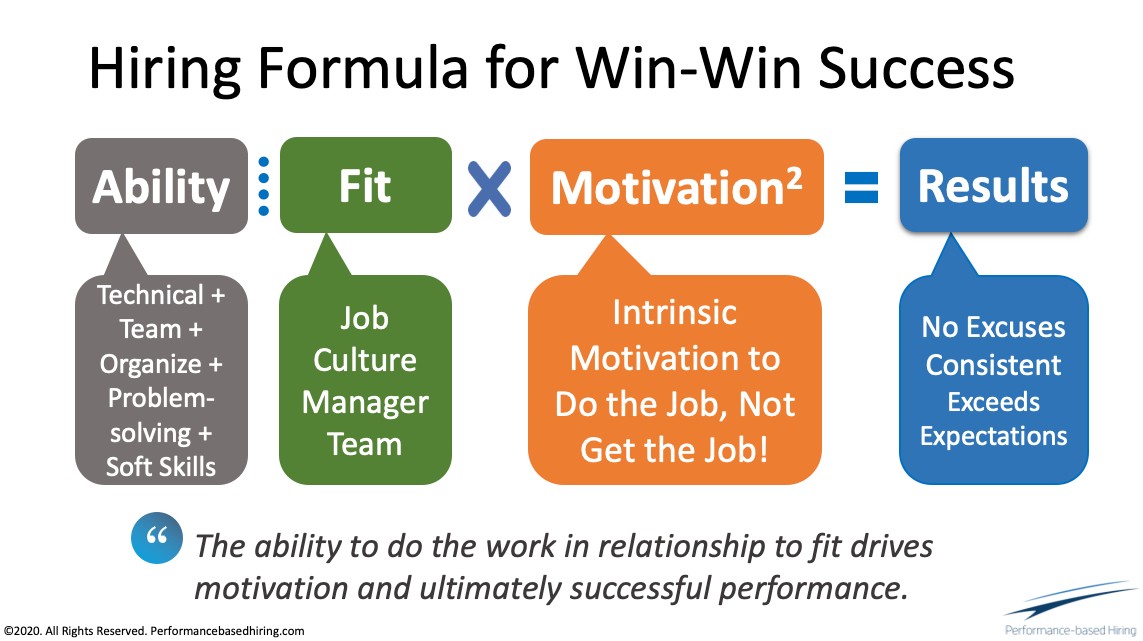 It turned out that while the formula captures all of the variables, the real challenge was convincing multiple and opinionated interviewers to change how they interview in order to collect the right evidence. Overcoming this barrier resulted in the development of the “Whole-Brain” Performance-based Interview.

The semi-scientific explanation for this interviewing technique starts by recognizing that the brain consists of four core parts.

Unfortunately, at least for interviewing accuracy purposes, the logical decision-maker is typically overridden by the interviewer’s “stupid switch” when first meeting the candidate. When the reaction is negative, the interviewer asks hardball questions in an attempt to prove the candidate incompetent. When the initial response is positive, the interviewer asks softball questions, leans forward, and goes into sales mode. About 50% of all hiring errors are due to this subconscious reaction: hiring people we shouldn’t and not hiring those we should. The other 50% of mistakes is attributed to not assessing the non-technical skills properly.

Interviewers are not all influenced to the same degree by this emotional response. Techies are the least affected, and if you look closely, you’ll see their left brains are a bit bigger than most people’s. As a result, they tend to be more conservative, less willing to make a decision without lots of proof, and value experience and the depth of technical skills over potential. While most of their hires are technically strong due to this type of decision-making, it’s problematic if these people will have all of the non-technical skills necessary to become all-around strong performers since these are only superficially assessed.

Those who emphasize right-brain decision-making, typically managers and executives, place more trust in their intuition over facts and evidence overvaluing first impressions, strong communication skills, intelligence, and assertiveness. As a consequence, they typically hire people who are smart and strategic but their subsequent performance swings widely when considering team building and achieving consistent results.

Then there are others who ignore their brains entirely and just go with their gut reaction. Salespeople tend to fall into this category more than other functions. In this case their hiring results are across the board, with wide and violent swings in either direction. This is typically why sales jobs have higher turnover than most positions.

The “Whole-Brain” Performance-based Interview process corrects all of these problems. Here’s a quick overview:

While the “Whole-Brain” Performance-based Interview is a powerful tool for accurately predicting quality of hire and on-the-job performance, getting a bunch of independent interviewers to think like a team is often the bigger challenge.