Time is Your Most Valuable Asset - Don’t Waste It

Long ago a candidate told me he was taking an offer from another company for a little more pay, a better title and a job closer to home.

Among other things, I told him he was making a long-term decision using short-term information.

The seemingly better job was ill-defined and in an industry that was going sideways. The position I was representing was in a dynamic industry that offered significant upside potential. But my “Spock-like” point of view was clouded by the candidate’s better offer in hand and a chance to get out of a bad situation.

To shock the person into some reality I said, “Time is your most valuable asset; don’t waste it. Again.” This worked a bit. To demonstrate these strategic vs. tactical differences I asked the candidate to compare the job on the three factors shown in the table. 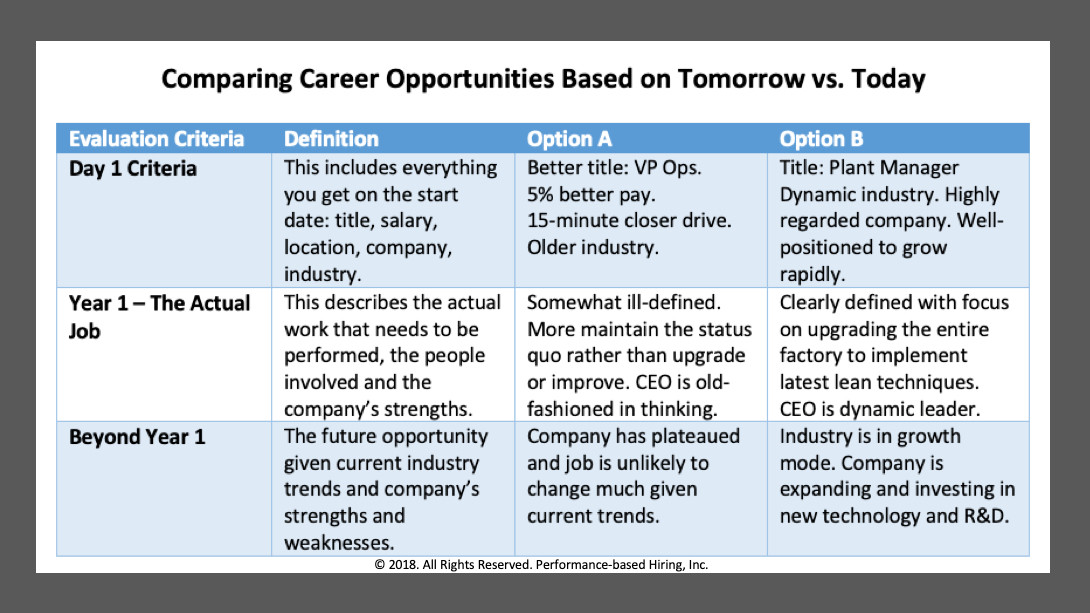 It took about 20 minutes to go through these comparisons and I asked the candidate to think it over before he accepted the job which on the surface seemed to be better when evaluating just the short-term factors. The candidate called me the next day and told me he was convinced the better job was the one I was representing and accepted the offer later that week.

I kept in touch with the candidate for a month or two and it seemed everything described about the work and situation was pretty close to what we discussed when we made the comparison.

About 9 months later I got a call from the candidate. He thanked me profusely for intervening and challenging his career decision-making. He told me he was just promoted to a VP Operations position handling multiple plants. He also said he used the same “Time is your most valuable asset, don’t waste it,” technique with a few people he had recently hired with similar results.

During every interview since then I ask candidates why they changed their last few jobs and if the purpose of these job changes was achieved. In most cases people change jobs due to lack of career progress with the hope the move will put them back on a better growth path. In most cases these same people make excuses why things didn’t pan out as hoped. Making a job change is serious business, certainly more important than buying a car, a new phone or a new appliance. Yet in most cases, less time is spent making the job change decision.

This pattern of short-term career decision-making results in job-hunting syndrome: a tendency to over-emphasize the short-term benefits of a job change with not enough investigation into the true long-term opportunity. After a few such moves, years of opportunity are lost. Sometimes a step-back is in order, or some extra risk needs to be taken. In many cases staying in place and not even taking the risk is the worst decision. Because as I told one candidate so many years ago, “Time is your most valuable asset, don’t waste it.”