My firm was involved in a project last year that started with a call from a talent leader trying to figure out why the company’s hiring managers needed to see so many candidates to make one decent hire. She was under a lot of pressure to get her team to perform since many of these hiring managers were starting to revolt and use external recruiters to get their positions filled. 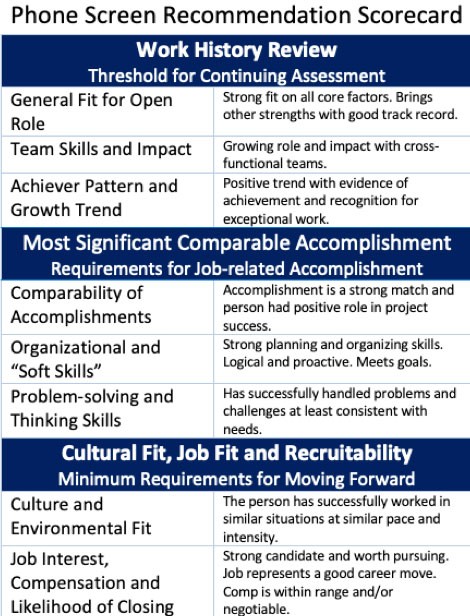 This represents a classic case of a sourcing and selection process that’s out of control.

To determine the root cause of the problem we suggested we listen in on a few of her recruiters’ phone screens. Based on this we could quickly determine if the information being gathered was consistent with what was described in the scorecard shown in the graphic.

Here’s what we learned after listening in on a dozen phone screens:

Related: This Phone Screen Checklist is the Swiss Army Knife of Recruiting

There were some excellent recruiters on the team, but our project only entailed working with those who were underperforming. For these recruiters, we suggested they all master this performance-based phone screen starting by listening to this podcast. Those that did had noticeable improvements within a week. Here are the basic steps:

While a phone screen like the one described won’t solve all of your problems, it will certainly help identify the ones you currently have. Here are some big clues:

These phone screen inbound and outbound metrics can help diagnose the health of your entire hiring process. As you’ll discover, once you start collecting them, you won’t be able to stop.