Part 2 in a Series on Hiring Outstanding Diverse Talent. (Part 1)

As part of the fourth edition of Hire with Your Head (Wiley, September 2021) we’re starting a unique book club for those who pre-order the book. Over the next several weeks I’ll be highlighting different themes from the book. This week focuses on the idea of hiring for the long-term rather than the start date in order to achieve consistent Win-Win Hiring outcomes.

While there are many variables involved when it comes to hiring, lack of clarity around job expectations and the attempt to speed up the decision-making process rewards the wrong behaviors. The impersonal nature of the process makes it too transactional with the size of the start date compensation package valued more highly than the career opportunity the role represents. Given this, job hopping becomes the acceptable norm with the need to avoid mistakes being more important than hiring the best person available.

Without an integrated end-to-end system too much is left chance, letting bias, hiring manager desperation, and the competency of those involved in the sourcing and selection decision dictate the quality of the people hired and their ultimate performance. That’s why little progress has been made in the past 25 years in terms of improving quality of hire, increasing job satisfaction or reducing turnover. This is both a strategic and a process design problem.

More important than the process itself is the need for a company to embrace the idea that hiring success shouldn’t be measured on the start date; instead it should be measured on the first-year anniversary date. This is called Win-Win Hiring.

A positive Win-Win Hiring outcome after one year means the new employee is still fully satisfied with the role and his or her career progression, and the hiring manager is delighted the person was hired a year earlier. Achieving this important hiring outcome changes how the hiring process is designed, managed, and implemented, including how both the hiring manager and the candidate make their decisions to move forward in the process and make and accept offers. Getting all of these critical steps properly aligned starts with the right talent acquisition strategy.

With this strategic supply versus demand starting point, it’s important to recognize that there are three major hiring challenges most companies face as shown in the infographic. Given this segmentation it’s important to note that the same hiring strategy and associated processes won’t solve all three challenges, especially when the overriding goal is to achieve more consistent Win-Win Hiring outcomes. While high tech can be part of the solution, it can’t be the primary solution, especially in those situations when the demand for talent far exceeds the supply. 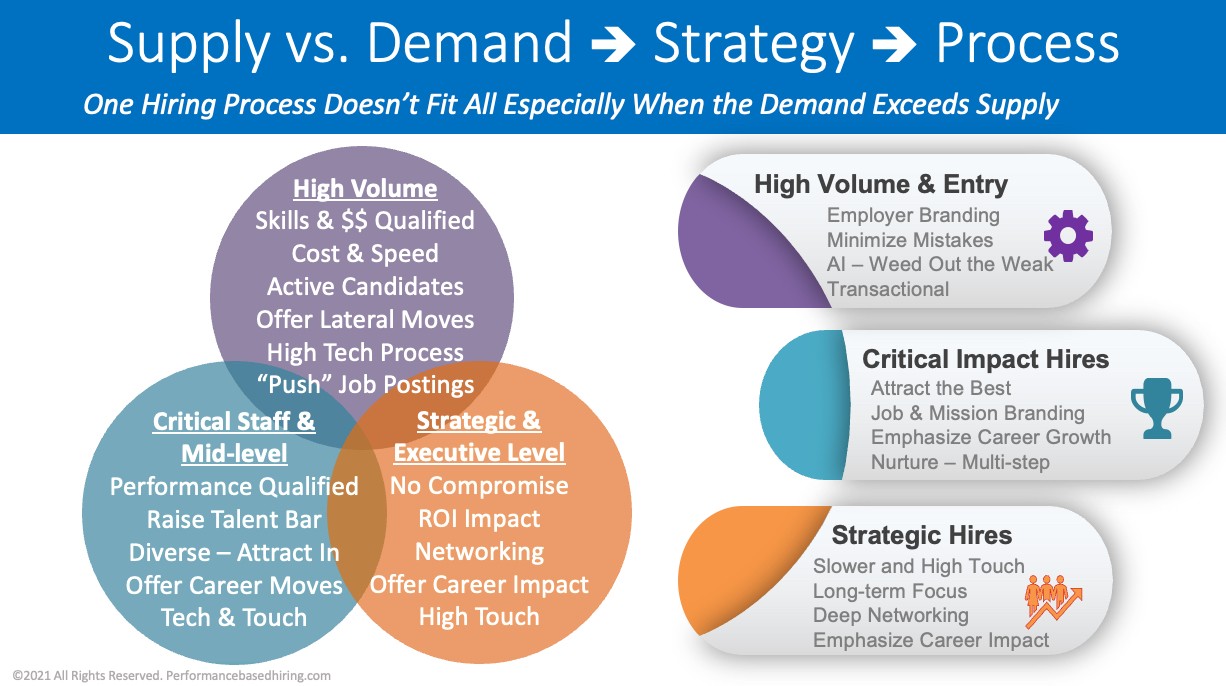 High Volume Hiring: The focus here is filling rank-and-file and entry-level roles efficiently and at low cost while minimizing mistakes. In this approach achieving Win-Win Hiring outcomes is problematic since the jobs are poorly defined and the decision-making is very short term for both the company and the candidate.

Hiring for Critical Staff and Management: Improving quality of hire needs to be the goal when filling critical professional staff and mid-management positions. This requires a process targeting outstanding and diverse people who all have significant upside potential and who would likely see the role as a career move worthy of consideration. Most of these people will be passive and/or hard to find. While technology and advanced sourcing tactics are needed to identify them, just as important are excellent recruiters who can reach out and engage with them in a consultative manner and hiring managers who are willing to engage with these potential prospects very early in the process.

Strategic Leadership Hires: Absolutely the best people must be hired to fill critical technical and executive level roles that have a direct bearing on the company’s future success. This requires a high-touch process emphasizing networking and the need to invest the time necessary to convert strangers into acquaintances long before an offer is made.

Regardless of the mix of high touch and high tech used, better results can always be achieved when a Win-Win Hiring outcome is the overriding objective used to decide whom to hire and why. This entire process will unfold and become apparent as you apply the concepts described in Hire with Your Head – Using Performance-based Hiring to Hire Outstanding Diverse Talent.