Home → The Adler Group Articles → Interviewing is Not About Asking the Right Questions; It’s About Getting the Right Answers

While asking a bunch of standard behavioral questions might help eliminate weak candidates, that approach will backfire when interviewing the strongest candidates. In fact, I’ll contend that with just two basic questions you can accurately predict ability, motivation, fit, performance and potential. One question involves digging into the candidate’s major accomplishments, the other how the person would figure out how to solve a realistic job-related problem. 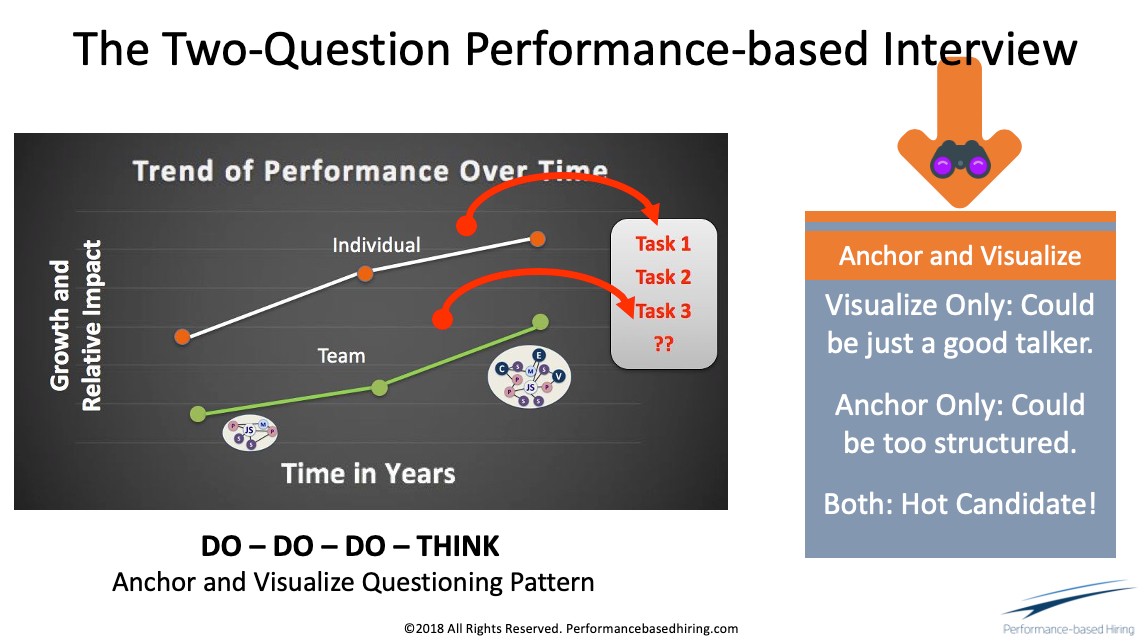 Despite the predictive power of these two questions, getting the right answers is the real challenge, not asking the questions. This is especially important when it comes to interviewing the strongest people. In these cases, getting the right answers is only half the purpose of the interview. The other half is getting the candidate to see your job as the best career move among competing alternatives. Achieving this needs to occur during the interview, not afterwards in some brazen attempt to oversell the person on the merits of your job.

By conducting a professional, inquisitive and objective interview you can not only determine if the person is competent and if the job represents a good career move for the person, but it also allows the hiring manager to demonstrate his/her leadership qualities. These conditions are all part of the decision-making process when strong candidates compare opportunities and choose one to accept.

An example will help illustrate the idea of using the interview to both assess and recruit the candidate in tandem rather than in sequence.

One of the major accomplishment questions we suggest using is to ask the candidate to describe his/her most significant team accomplishment. To get the right answer to this question you need to probe quite a bit to fully understand the candidate’s actual role and impact.

After providing a quick overview, think about how you’d answer the following clarifying questions:

By itself, this type of question and fact-finding would reveal a lot about the team skills of the person being interviewed. What did the approach reveal about you?

Now consider the approach from a recruiting standpoint. First, the candidate knows the interview was thorough, professional and objective. Given this and assuming the candidate is a possible finalist but hasn’t managed as big of a team or in the same environment, a good follow-up question could be something like, “While I’m impressed with the breadth of your team skills, I’m concerned that our situation is a little different. We’re growing at a rapid pace and our teams are shifting in size and makeup almost at a moment’s notice. If this job is of interest, I’d want to understand if you’ve ever managed teams and projects in this type of environment. If so, could you describe the situation, the team involved, and the results achieved?” Then to fully understand the team accomplishment, repeat the fact-finding as above.

Now don’t be surprised if the candidate finds this type of situation appealing, the person will push back and attempt to convince the interviewer he/she is qualified. The idea here is that recruiting is not selling the candidate, recruiting is providing enough of the right information to get the candidate to sell the recruiter or hiring manager. That’s why having a list of standard, trick or behavioral questions isn’t good enough when dealing with outstanding people who have multiple opportunities. In these cases, it’s getting the right answers that matter the most, not the questions themselves.